Strongest Liverpool Line Up To Face Arsenal: A Former Gunner To Leader The Defense

ARTICLES BLOGS INTERVIEWS Liverpool Dragon Off the pitch One Football

Predicted Liverpool Line Up vs Arsenal 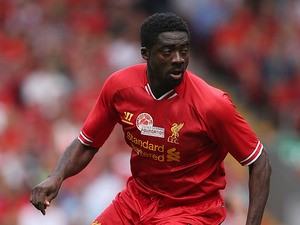 Liverpool will have to face a big test when they face Arsenal on Wednesday amidst their injury crisis. We saw Jurgen Klopp fielding a young and inexperienced side against Exeter in their FA Cup fixture on Friday, but the game against Arsenal is no child’s play. Klopp will have to have field a strong eleven with the players he have at the moment. Liverpool also received the good news that Jordan Henderson, Jordon Ibe, Mamadou Sakho and Kolo Toure will be available against Arsenal on Wednesday. But we cannot expect Jordon Ibe and Jordan Henderson to be fit enough to start the game. Sakho is a doubt but it is almost certain that Toure will start. Here is our predicted Liverpool lineup to face Arsenal on Wednesday:

Liverpool second keeper, Adam Bogdan, got another chance to shine for Liverpool against Exeter on Friday, but again the Hungarian failed to impress. He let the Exeter side to score directly from a corner. Liverpool’s current number one, Simon Mignolet, is expected to go back into the starting line-up against the Gunners. Liverpool have recalled the young goalkeeper, Danny Ward, from the loan. This means that Bogdan’s Liverpool career is literally over and Mignolet will have to do better in order to keep his position.

Nathaniel Clyne and Alberto Moreno are two of the few players who are not affected by any injury. They are fit and they are expected to start against Arsenal. Brad Smith had a great game against Exeter, but that won’t guarantee him any first team spot. And we can’t expect Klopp to play Smith against a team like Arsenal, but we may see come on a substitute later on in the game. Former Arsenal man, Kolo Toure is expected to leader the defence while Sakho is still a doubt. He will be available for the game, but there is no guarantee that he will be fit enough to start. If Sakho is not fully fit it will Lucas Leiva who will be playing as the centre-back for Liverpool.