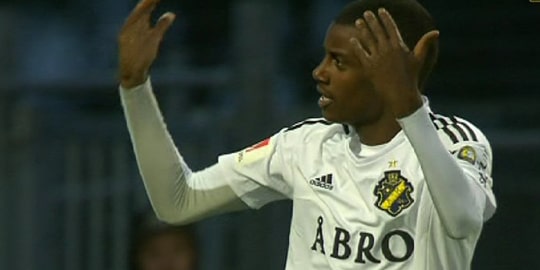 The 17-year-old plies his trade for AIK Solna in his native Sweden and has been drawing interest from multiple top clubs for his goalscoring prowess. His style of play, and of course nationality, has earned him the tag of the “next Zlatan Ibrahimovic”, which would come as a massive compliment for the player.

The Catalan giants are supposed to be monitoring him with the most intensity at the moment and have turned up their pursuit of the player.

Isak’s goalscoring prowess can be illustrated through his goal record recently. The 17-year-old has managed six league goals in 18 games this term. He has also scored seven times for Sweden’s U-17 side.

Liverpool boss Jurgen Klopp has a reputation of nurturing bright, young talents and a move to Merseyside could mean tapping Isak’s potential extremely well. Considering the player is only 17, he will not be brought into the first-team fold immediately, but Klopp is a manager who doesn’t hold age to be a factor. If Isak impresses in training and youth games, there is no doubt the manager would give the player a chance to impress for the first team as well.

There is a chance whichever club he signs for will send him out on loan to further his development.

His teammates are aware of the talent he possesses. In fact,

On his potential, Isak’s AIK team-mate Obasi told Swedish outlet FotbollSkanalen: “He is a great potential, and I believe that he will go far. If he concentrates and continues as he is, I think he can become Sweden’s next Ibrahimovic. He has the potential; everyone can see it.”

It is no wonder so many top clubs are after him at the moment, and Liverpool are one of them. Acquiring a player who could have a bright future would be a smart thing for the Reds to do. The transfer market has become ridiculous, and talent goes for massive amount of money. Manchester United shelled out large sums for Anthony Martial and Eric Bailly after both had one great season at their respective clubs. Buying Isak now would mean Liverpool could also earn a huge profit in the future.

However, there are several clubs in the fold for the talented striker. It would take Liverpool a lot to land the Swedish starlet, but the effort might be well worth it.

Most Passes, Most Goalscoring Opportunities Than Any Other Team – Liverpool Look The Real Deal This Season