Liverpool are on course for a place in the Champions League semi-finals as they take a 2-0 lead to FC Porto for the second leg of their quarter-final on Wednesday.

The Reds picked up a comfortable victory at Anfield last week, but they still have work to do against a Porto side with a 100% home record in this season’s competition. The Merseysiders followed up their win against the Portuguese outfit with a 2-0 success over Chelsea in the Premier League at the weekend.

The two-goal margin of victory last week leaves Jurgen Klopp’s men in a very strong position, though, and history suggests that we should see the job through in Portugal.

Liverpool may be without Jordan Henderson after the midfielder picked an ankle injury in the second half of the Chelsea match.

Adam Lallana and Alex Oxlade-Chamberlain are unlikely to be a part of this game but Andrew Robertson is set to return after serving his suspension.

Alisson is our first-choice goalkeeper and should be in goal on Wednesday.

Klopp could go with the experienced James Milner at right-back, considering the workload Alexander-Arnold has had this season.

Lovren played in the first leg and helped the Reds keep a clean sheet. Expect the Croat to start on Wednesday too.

The Dutchman is a giant at the back and certain starter for this game in Portugal.

The Scotsman was suspended for the first leg. Having served it, he is expected to walk straight back into the starting XI.

Fabinho has brought a calming influence in the midfield and his presence gives our attackers more freedom. Expect him to start on Wednesday.

Wijnaldum’s form has dipped in recent weeks but he still remains a crucial cog in Klopp’s system.

With Henderson doubtful, Klopp is expected to not take any risk with our skipper and go with Naby Keita. Keita has done well of late and deserves to keep his place in the team.

Salah scored a belter in the 2-0 win over Chelsea at the weekend. The Egyptian would be raring to make his mark at Porto on Wednesday.

One of the underrated players in the Premier League, Firmino is probably one of the first names on our gaffer’s team sheet.

Read more: “I hope I can play next to Van Dijk” – Teenage Liverpool starlet opens up on his future plans at Anfield

Mane scored in the 2-0 victory over Chelsea in the league and will look to guide our team into the semi-finals of the Champions League. 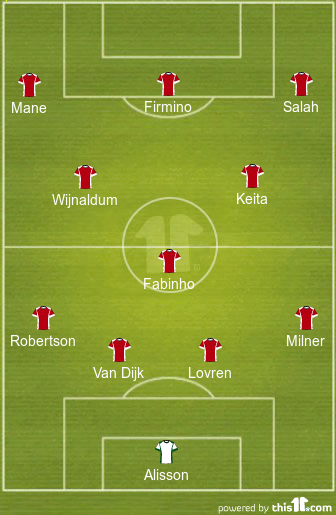